No photos of the new Atlanteans yet but here are the others:

This really is a fantastic range full of detail and character and I shall certainly be adding these to my Lost World minis!


I've taken some pics of my Lost World figures for my In Her Majesty's Name Lost World Roster but I thought I'd share them here in the meantime...

And here are some of the denizens encountered by the expedition in the Lost World...


I hope to have the stats done for the 'good guys' part of my IHMN Lost World setting over the weekend and will post them up along with the Lost World Beasties as soon as they're done.

The figures are a mix of Foundry and Lucid Eye along with a North Star Tea Time figure. All miniatures were painted by the inimitable Matt Slade! The scenery is a mainly aquarium stuff except for the tents which are from Renedra.

Posted by Mallius Vane at 11:17 No comments:

My latest lot of figures from Matt are on their way! Hooray! And he kindly sent me a few pics to whet my appetite!

The figures are mainly a mix of Foundry and Lucid Eye along with a North Star Tea Time figure and a couple of Warlord Games figures.

Of course, I shall post more pictures of them with some scenery as soon as I get a chance! And I hope to have stats for my In Her Majesty's Name Lost World Explorers and Allies up soon, too.

Posted by Mallius Vane at 11:26 No comments:

Thoughts on Lost World Games for In Her Majesty's Name 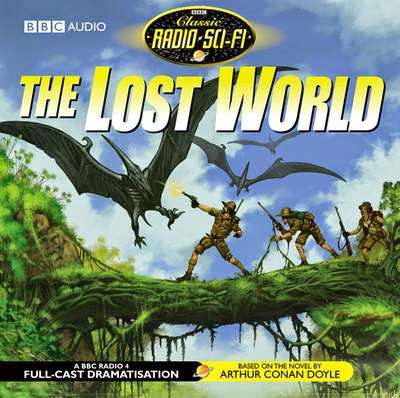 Next week Matt will be sending me thirty or so Lost World/Darkest Africa figures...the 'good guys', hurrah!...which has got me thinking about making up some Companies for In Her Majesty's Name.

After a bit of thought, and partly because there are so many figures, I've decided that instead of making specific Companies up I'm going to do a 'good guys' roster, a 'bad guys' roster and a 'beasties' roster for a Lost World setting. So, for example:

From this list you could pick any combination up to a certain amount of points. You'd then do the same from the 'bad guys' roster, Lost World Denizens, and maybe add a few Lost World Beasties then come up with a suitable scenario. I think this would really work well for a small, contained and specific setting like a Lost World. An expedition somehow stranded in a lost world, perhaps they've made a base camp from which they methodically search for an escape, meeting allies, enemies and strange beasts from times long past along the way.

In the end, a roster like this is not too different from some of the larger companies in the books or the extended Company I did for the Servants of Ra. Anyway, I shall post up something more concrete once I've got the figures and had the chance to take a few pics.
Posted by Mallius Vane at 14:34 No comments:

The Lost Temple of Aten! Part One - Companies and Set-Up - IHMN AAR


My son and I managed to get a game in last weekend. This time my boy wanted to try out the 'bad guys' and some Mystical Powers so he settled on The Servants of Ra. I, on the other hand, after several games playing the 'bad guys' was looking forward to playing one of my favourite Companies, The Prince of Wales Extraordinary Company! This post describes the Companies and Set-Up.

The Servants of Ra 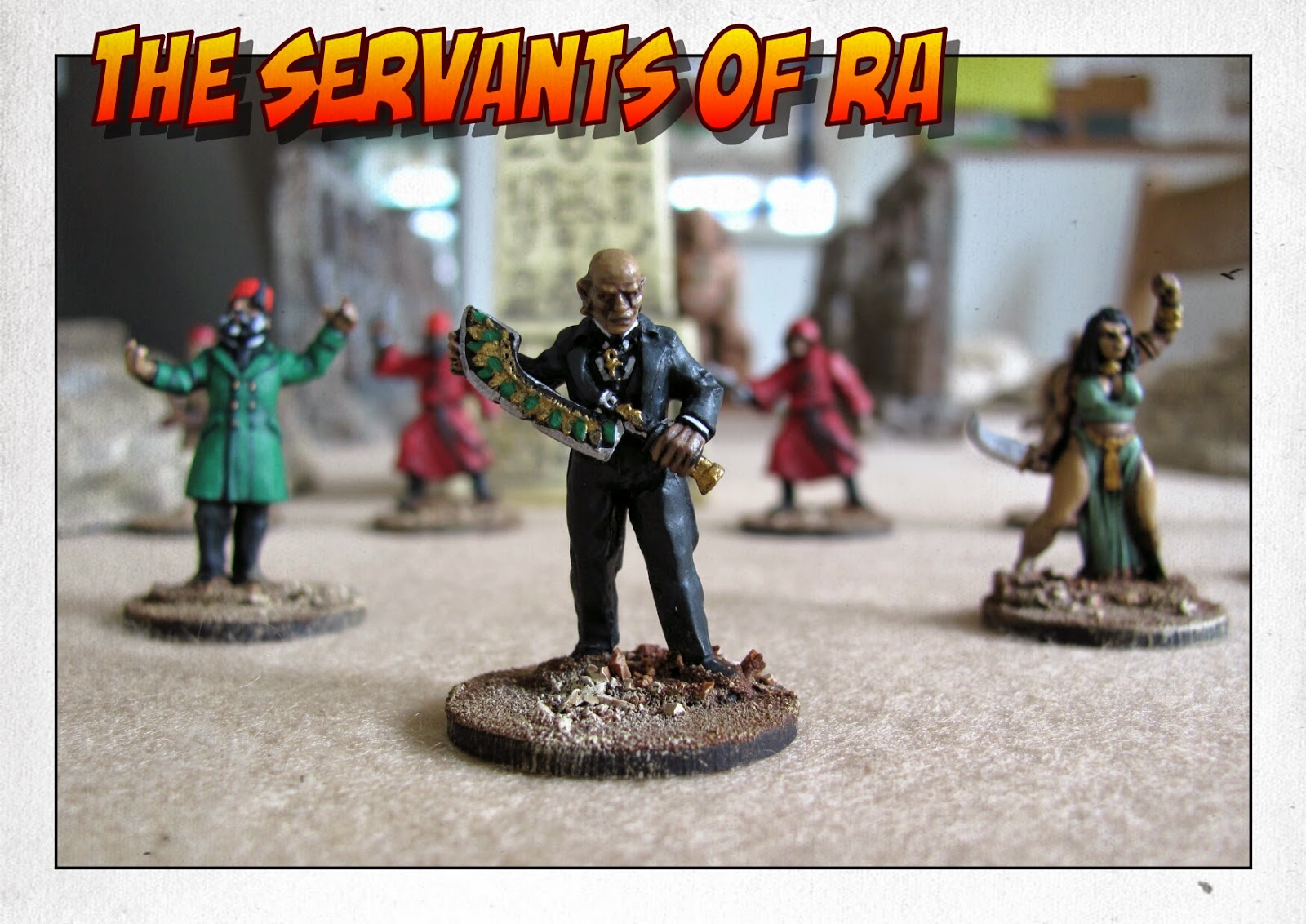 In addition to the background in the book:

Akhenaton can further count on the high priestess, Iset, who claims to be a direct descendant of the high priests of Aten at Karnak. As such, she is the guardian of much secret knowledge that has been passed down from generation to generation over the millenia and has been instrumental to Akhenaton in his attempts to locate the regalia of Ra. She has also been tireless in her efforts to restore Egypt and the Sudan to the old gods and the glories of the past, recruiting many fanatical followers to the cause. She relies mainly on her mystical powers in battle, though she is not averse to using her poisoned fighting knife when needs be.

My son took Akhenaton, Iset, the High Priestess, Professor Abir and a Mummified Priest along with two Cultists with Pistols and three Followers with Rifles for a total of 306. Some very tough characters with a lot of Mystical Powers!

The Prince of Wales Extraordinary Company 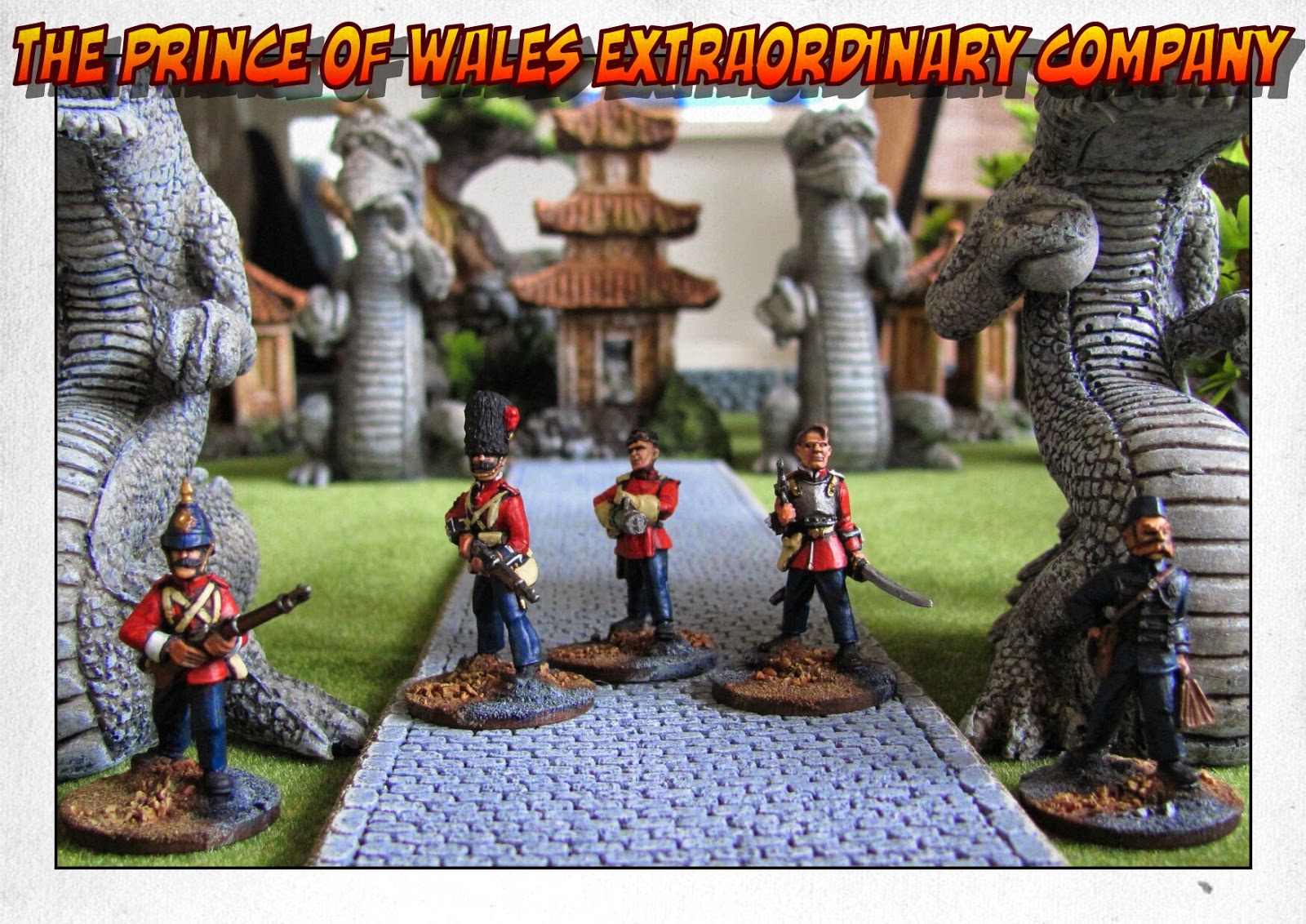 The Prince of Wales Extraordinary Company came to a total of 310.

Lord Wellesley, with a team from the British Museum, has discovered the long, lost Temple of Aten deep in the deserts of northern Sudan where, rumour has it, the Priests of Aten hid the original Crown of Upper Egypt, reputed to grant the wearer ancient Mystical Powers.

Unfortunately, word has reached Professor Abir and the Servants of Ra. Iset and her followers quickly make their way to Lord Wellesley's camp where they proceed, after a short battle, to slaughter everyone. Iset then awaits the arrival of her master, Akhenaton, and Professor Abir so they can begin the search for the Crown of Upper Egypt!

Meanwhile, the Prince of Wales Extraordinary Company, who have been following Professor Abir, are hot on their heels...and so the scene is set for a showdown at the Lost Temple of Aten!


We agreed that the Servants of Ra would set up around the Temple whilst the Prince of Wales Extraordinary Company would set up on the table edge. The overall objective was a bit hazy...we decided that the Prince of Wales Extraordinary Company needed to see off the Servants of Ra before they could find the Crown of Upper Egypt...they'd have five turns to beat off Akhenaton and his crew!


The next post will cover the battle itself, so stay tuned for:
The Prince of Wales Extraordinary Company in...The Lost Temple of Aten!


All miniatures were painted by the inimitable Matt Slade! The scenery is a mix of aquarium stuff and other bits I've found on Amazon. The hills are from Gale Force 9s Battlefield in a Box range. The tents are from Renedra.

Posted by Mallius Vane at 11:15 No comments:

Email ThisBlogThis!Share to TwitterShare to FacebookShare to Pinterest
Labels: AAR, IHMN Company, In Her Majesty's Name

Gothic Ruins - Battlefield in a Box 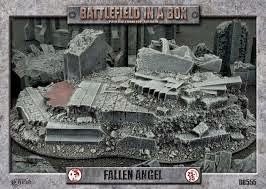 I've mentioned before how much I regret only recently coming across Gale Force 9s Battlefield in a Box range as most of the ranges are no longer being produced and are impossible to get hold of. That said, a while back Paul of Yours in a White Wine Sauce and The Man Cave pointed me in the direction of their Gothic range and while many of the bigger and more impressive pieces are also impossible to find, there are still various readily available pieces. Well, with the imminent arrival of Frostgrave I decided it would be a good idea to pick some up... 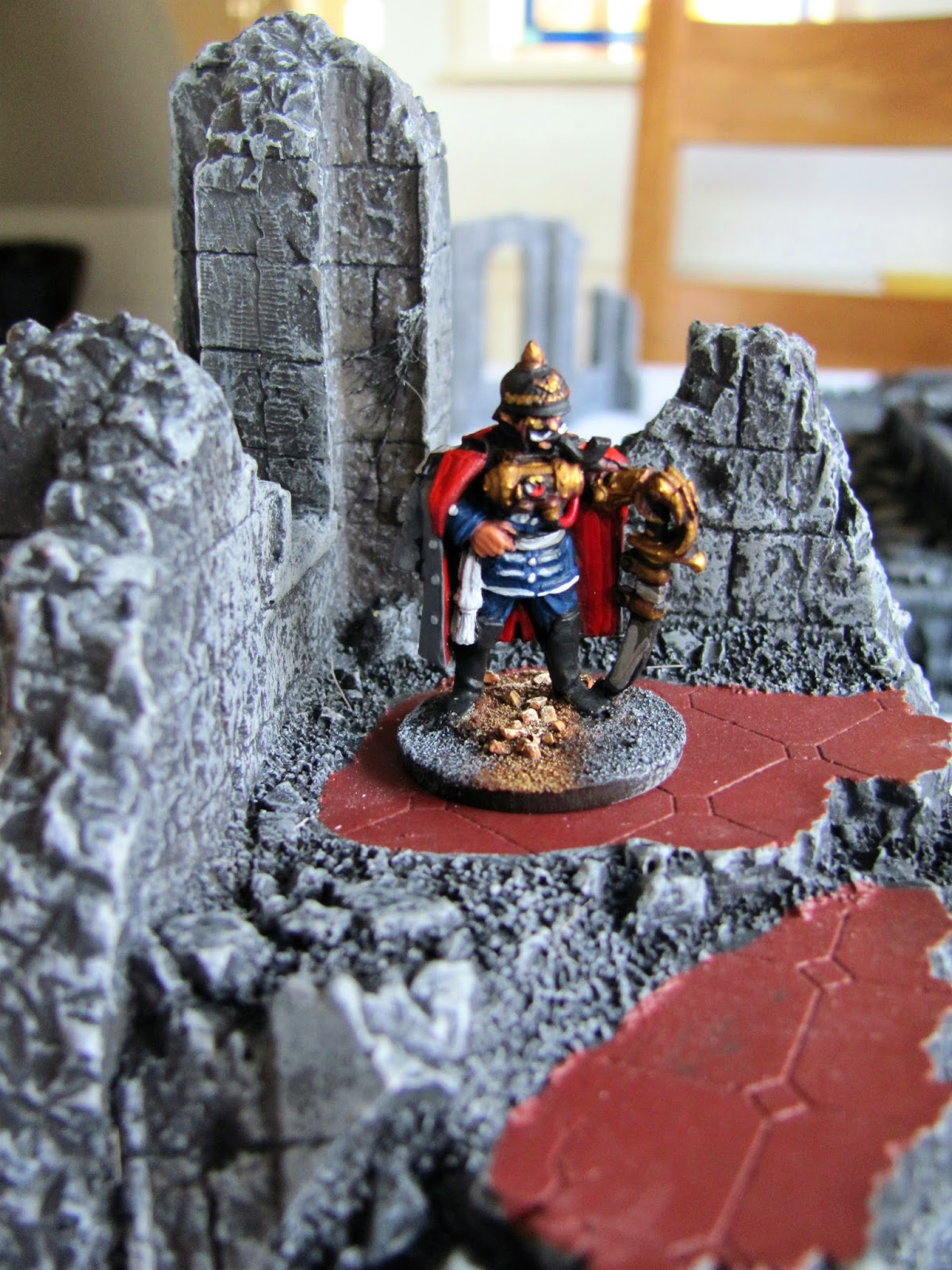 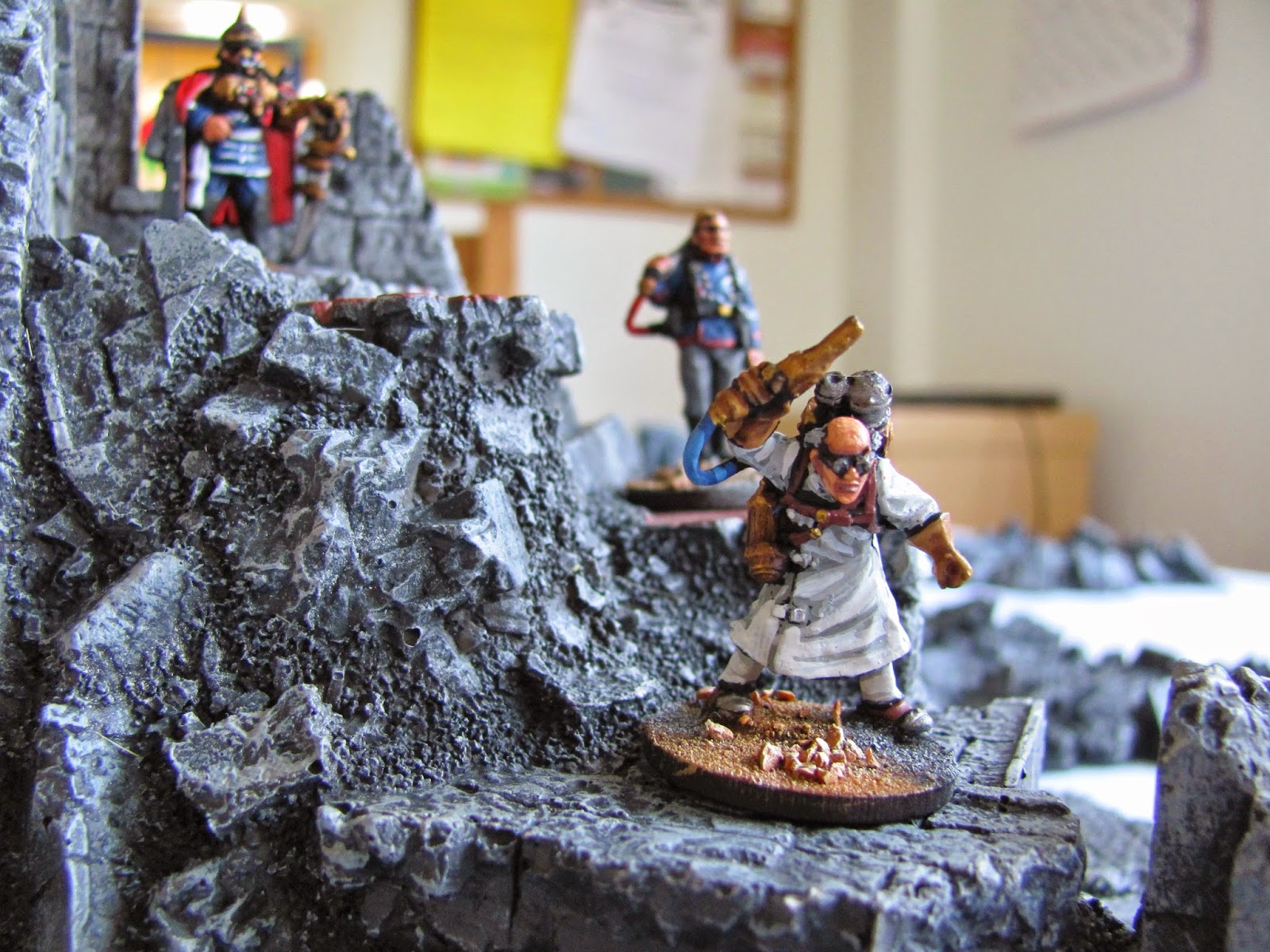 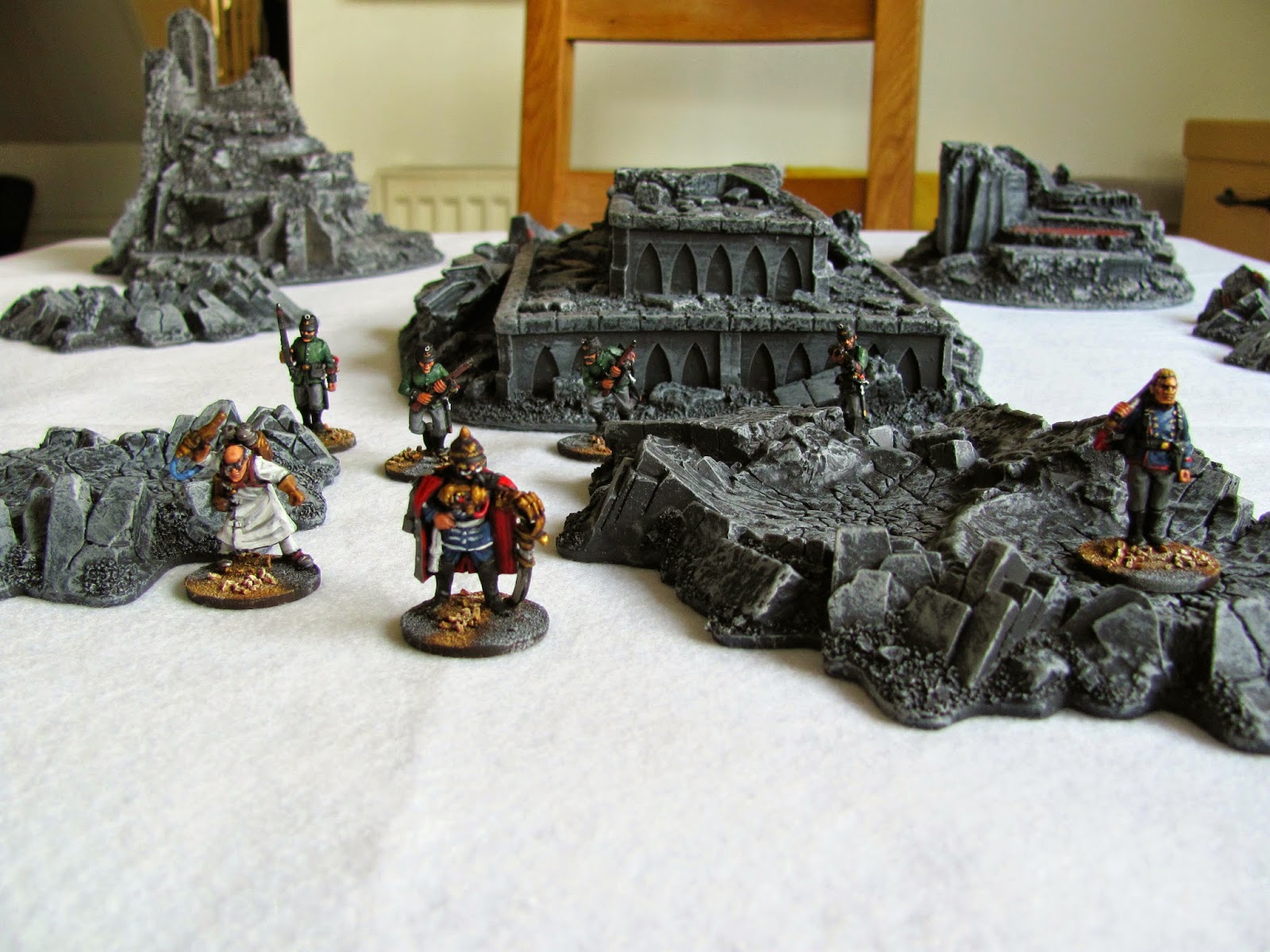 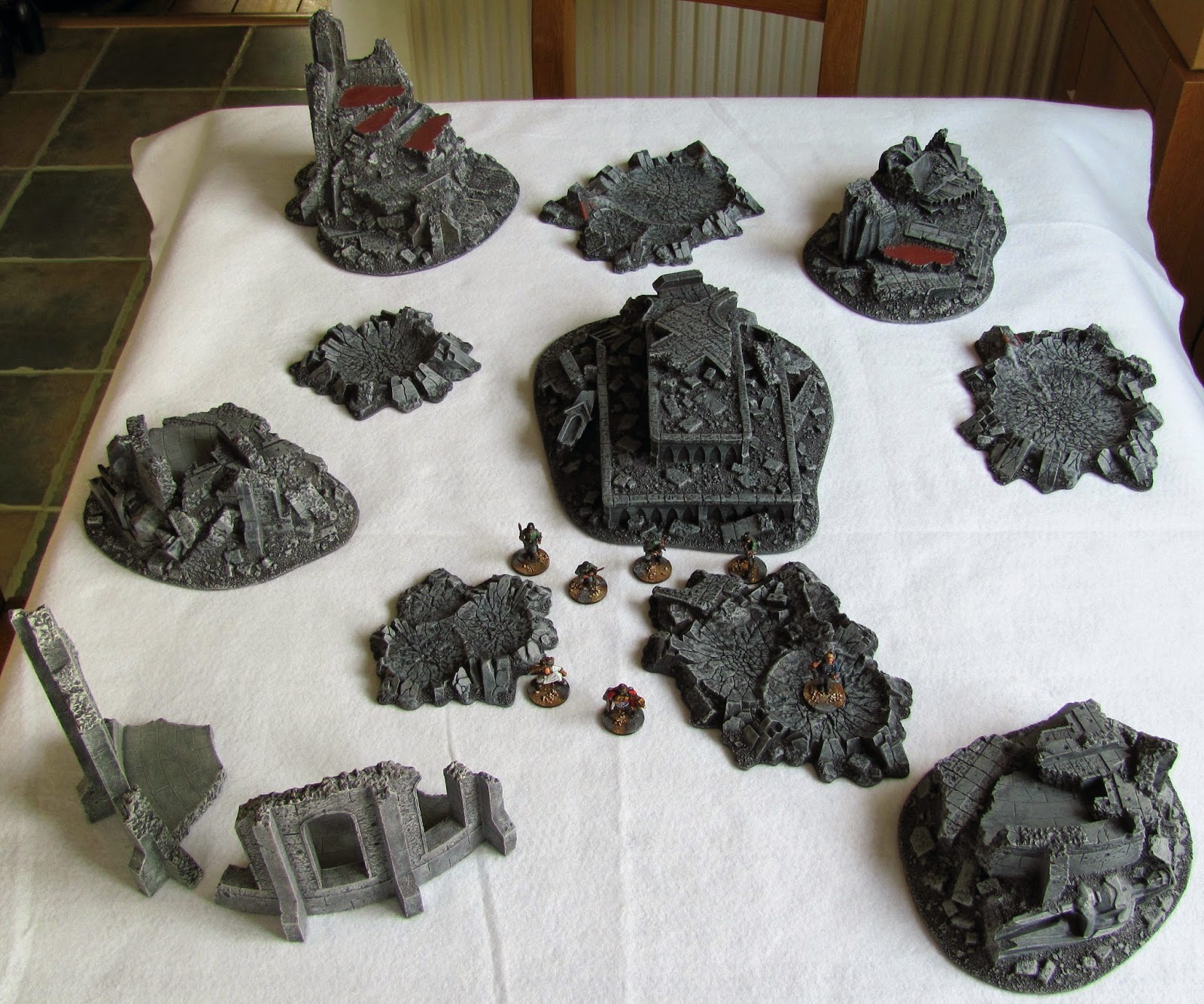 I'm not sure these pieces would be suitable for a historical game...the statues, for example, are very stylized...but they are perfect for fantasy and sci-fi and would do fine for Pulp or VSF games. As well as Frostgrave, I plan on using them for In Her Majesty's Name...the Society of Thule now have a new secret base and laboratory under the ruins of the evil Count's ancestral castle, high in the Alps!

Posted by Mallius Vane at 10:54 No comments:

Email ThisBlogThis!Share to TwitterShare to FacebookShare to Pinterest
Labels: Battlefield in a Box, Frostgrave, In Her Majesty's Name, Terrain

Dan Mersey has just announced on his blog that Osprey will be releasing Dragon Rampant, a fantasy variant of Lion Rampant, in December! Great news!

So many interesting games coming out over the next year...Dragon Rampant, Frostgrave, Congo, The Men Who Would be Kings, Savage Core, Open Combat...I'm not sure my wallet can cope!
Posted by Mallius Vane at 22:18 No comments: 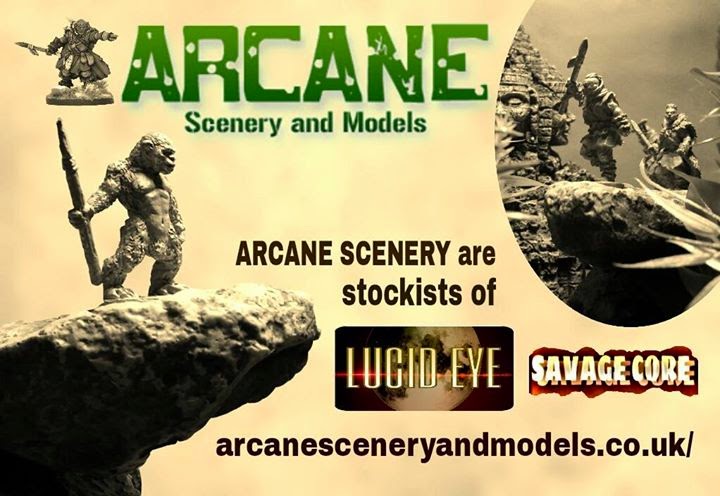 The Savage Core core range design work is complete. All of the codes, (bar one), should be available within the next week, (paws crossed). The missing one is Amazons 2, which is sculpted, depends whether or not I get it in a mould before going to Salute. Either way, it'll be fairly soon on that one. There should be blisters and faction bundles on the day, available from Superior Steve on the Arcane Scenery stand.
There's a website under construction! Hoo hah! At long last. I managed to look really pathetic at an awesome website guy who took pity on me and helped me out. Eternal thanks for that, he knows who he is.


Savage Core handbook is still in development. You'll appreciate I'm a one man dude kind of deal, I hope, and sometimes stuff has to take a back seat. Early signs are good, however, and it's a hoot to play. It's not 'wargamey' serious. I'm not sure it could be, considering the fact you're playing a monkey dodging plastic dinosaurs. We're looking at handbook size and I may put one or two faction lists on the website in order to playtest/develop.


That being said, Creative Craig, of In Her Majesty's Name fame, has offered to draw up some Savage Core stats for use with IHMN, which is very flattering. Not sure when we'll get to organise that, but shouldn't take a lot of time.
So, Lucid has had a difficult birth, it came out sideways, retreated back in, was dropped on it's head once or twice, but I'm happy to say, it's still breathing, and off to the nearest Montesori, where hopefully, it'll play nice with the rough boys. I'll continue to support Savage Core with new releases and I'm onto my next project which is pretty exciting to me. So, thanks, True Believers! (Too many comics..)

Posted by Mallius Vane at 13:46 No comments:

Antideluvian Miniatures have posted up on Facebook a sculpt of their upcoming Warrior of Atlantis and promise various pose variants and a couple of leader types. Great news! This range really has me excited!

Posted by Mallius Vane at 22:31 No comments:

Sorry it's taken so long but we have at last finished the Comic Book Battle Report of our last game! You can find the Set-Up and Companies in our earlier post here. Enjoy! 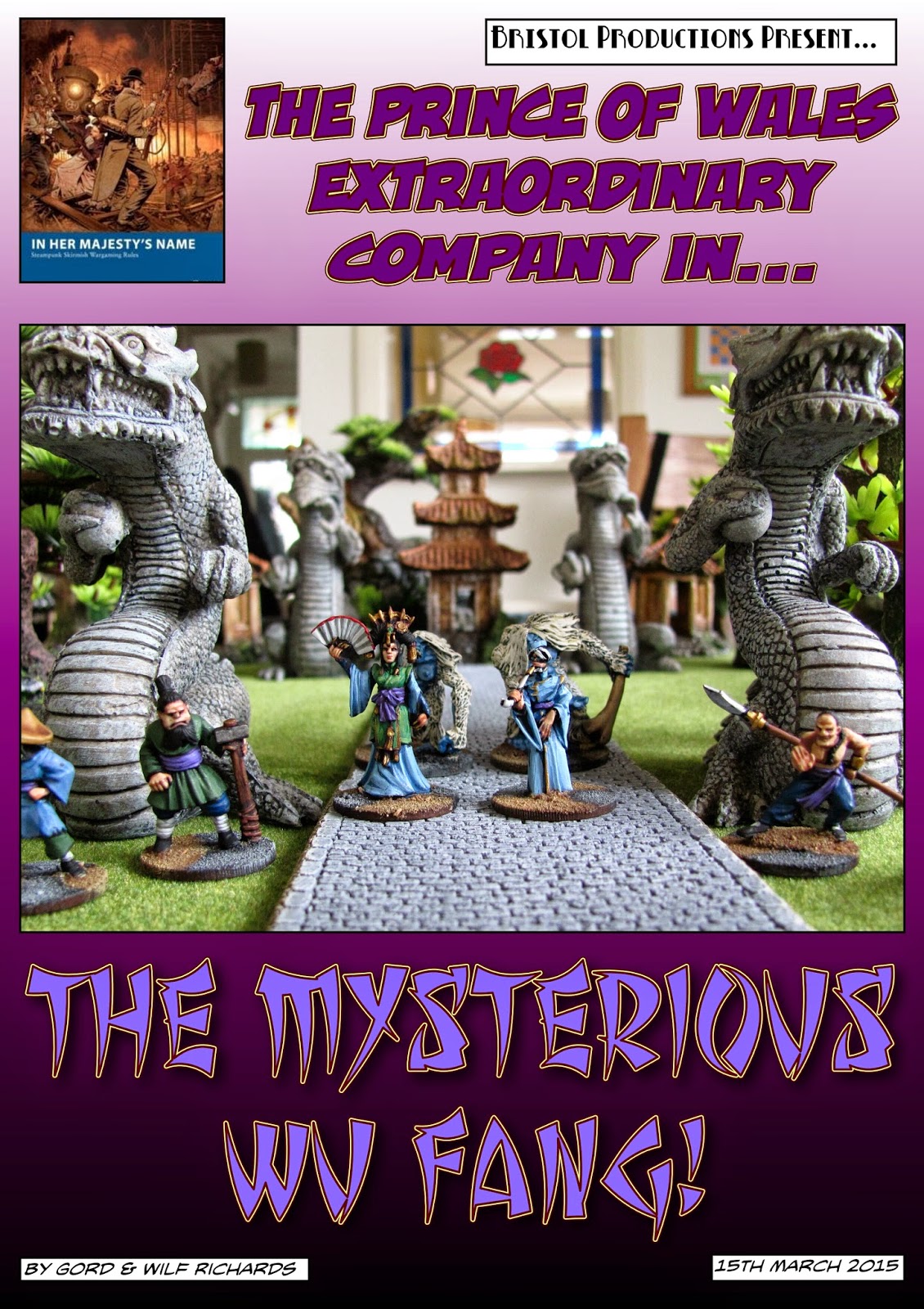 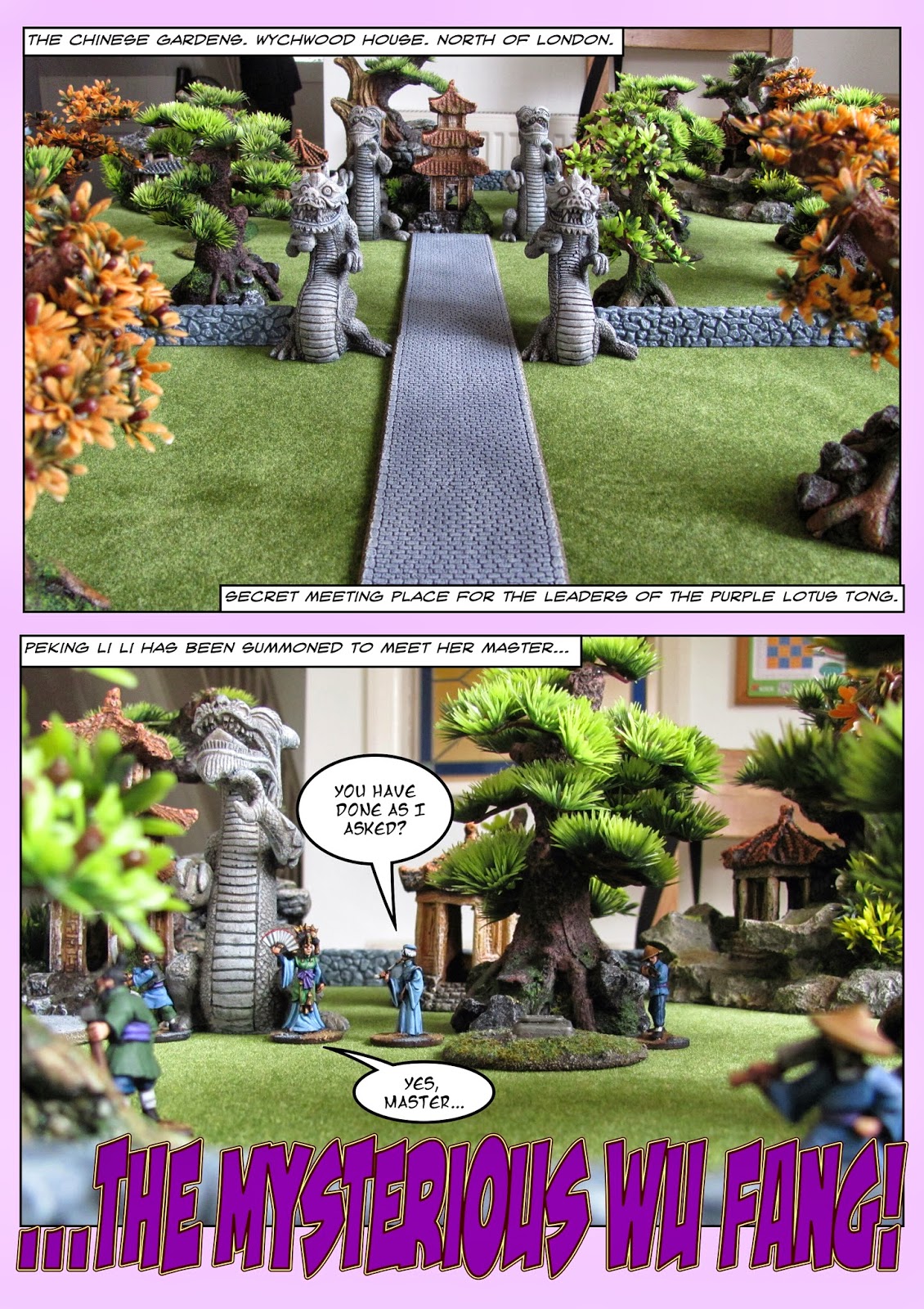 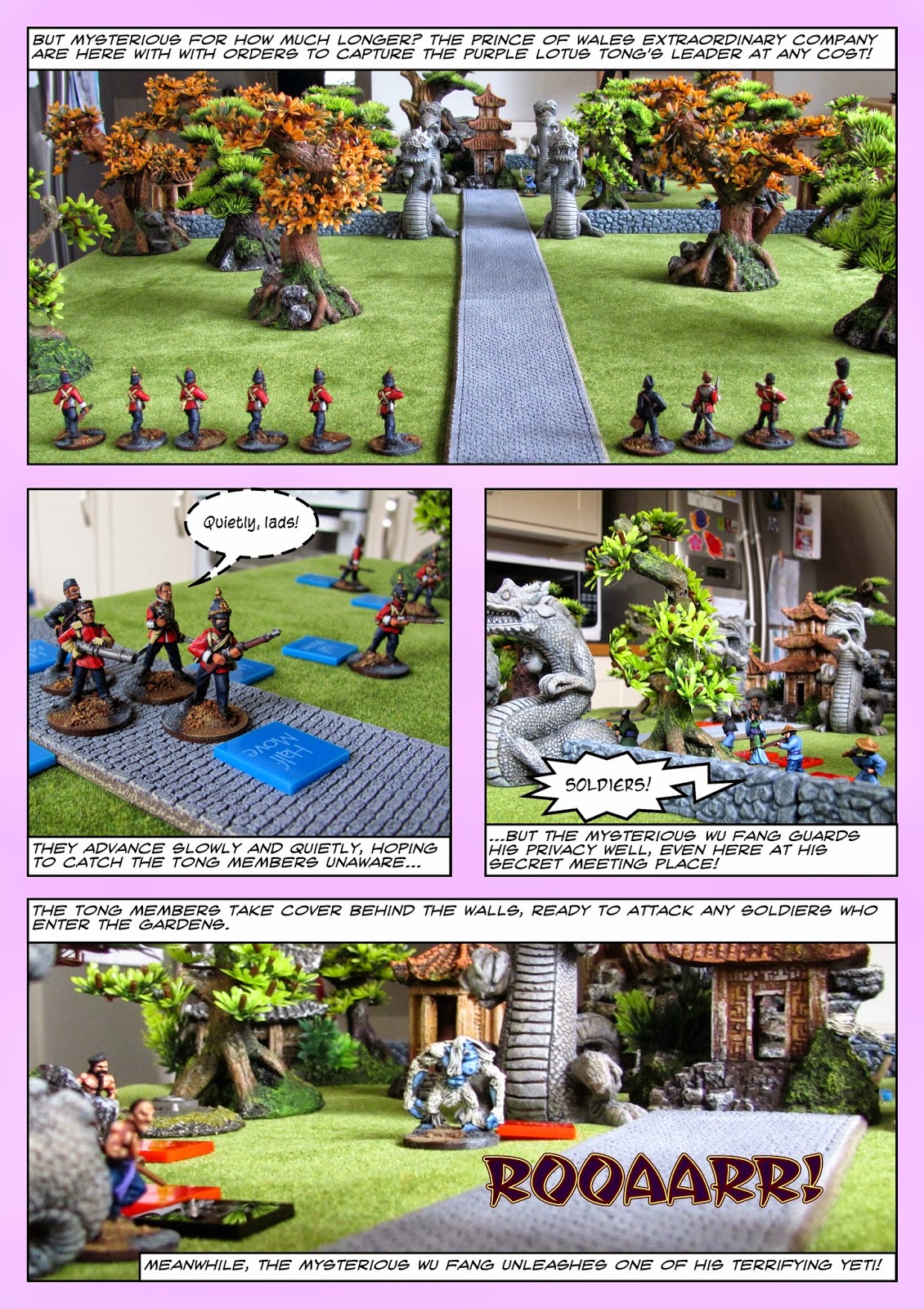 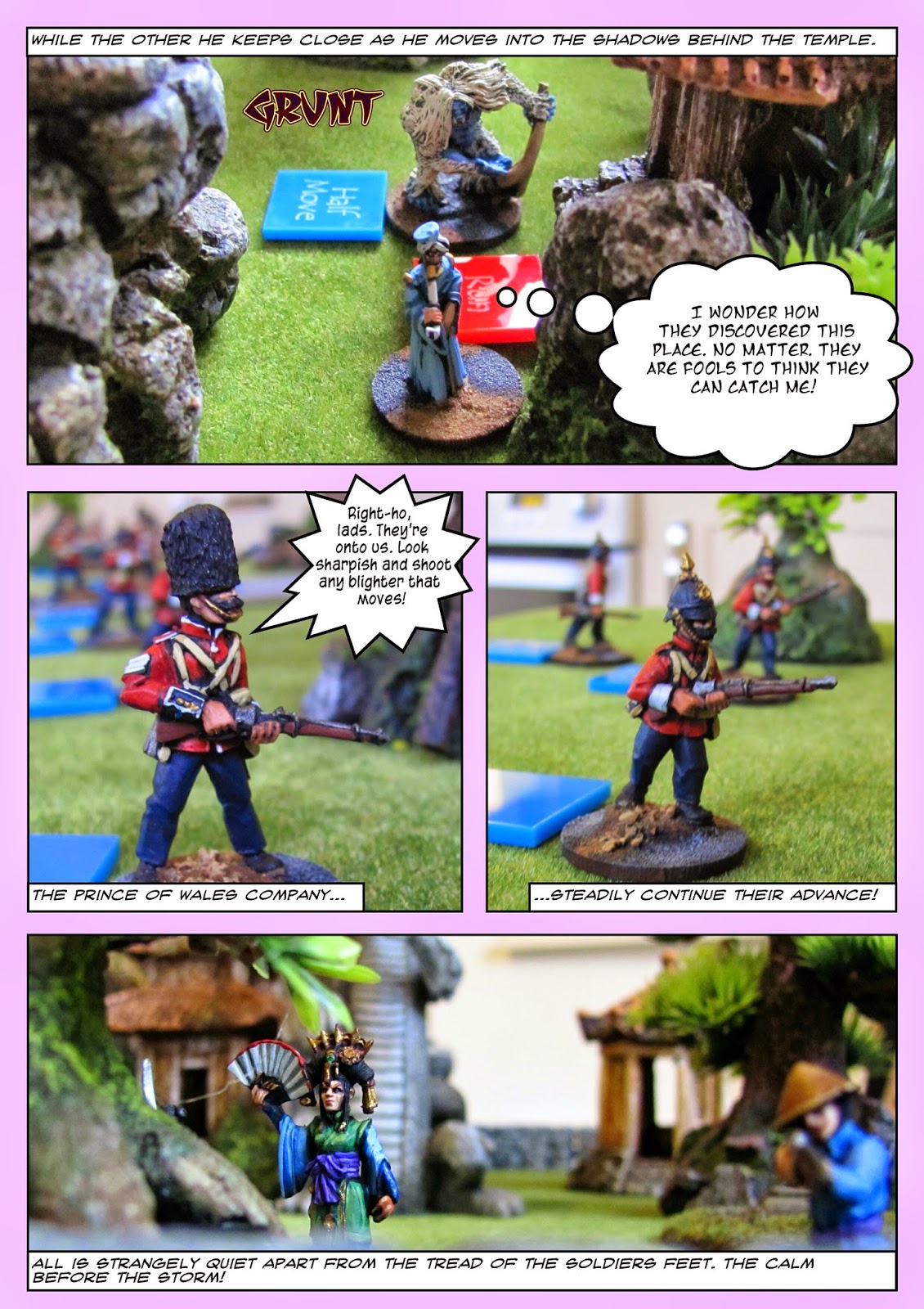 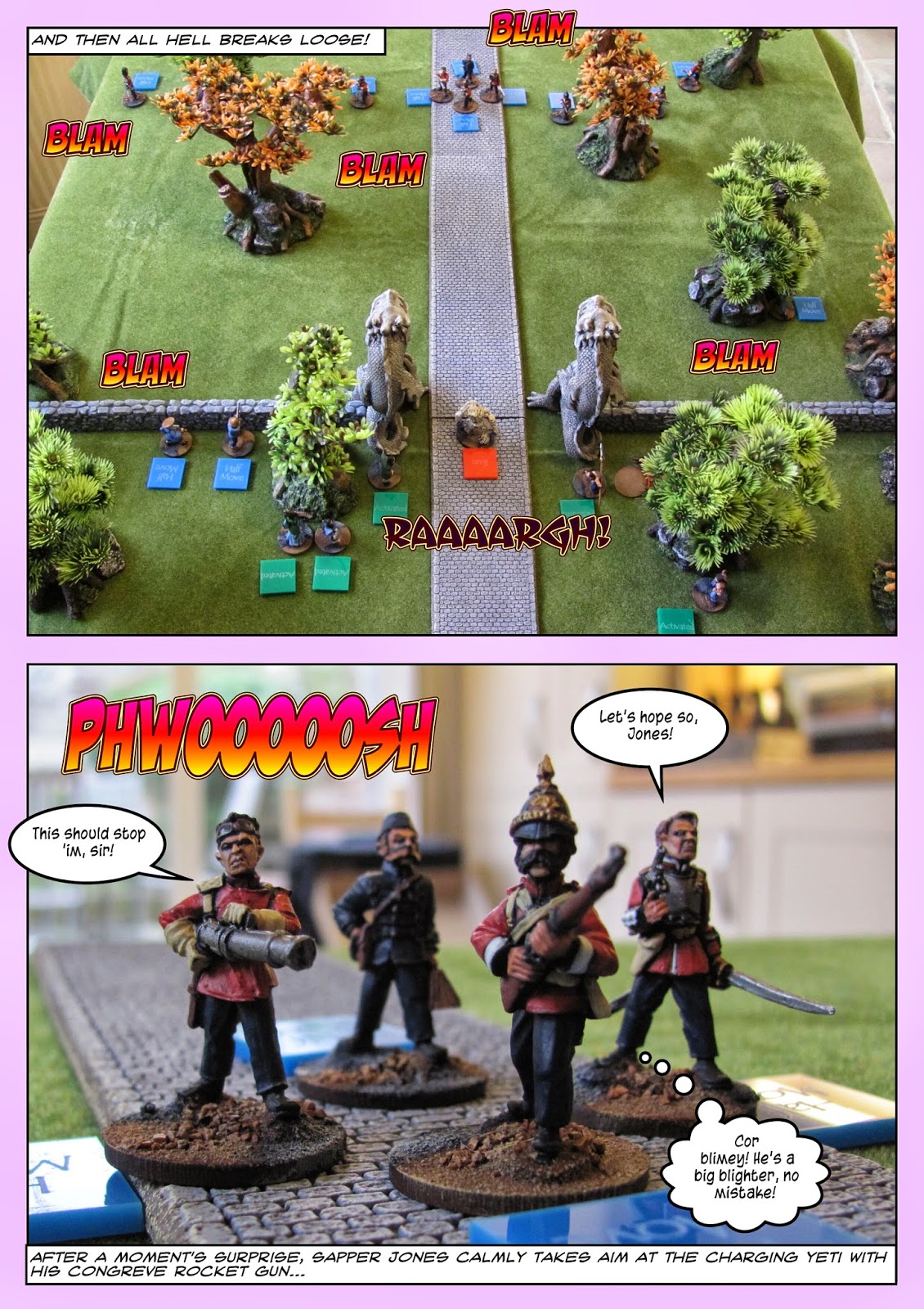 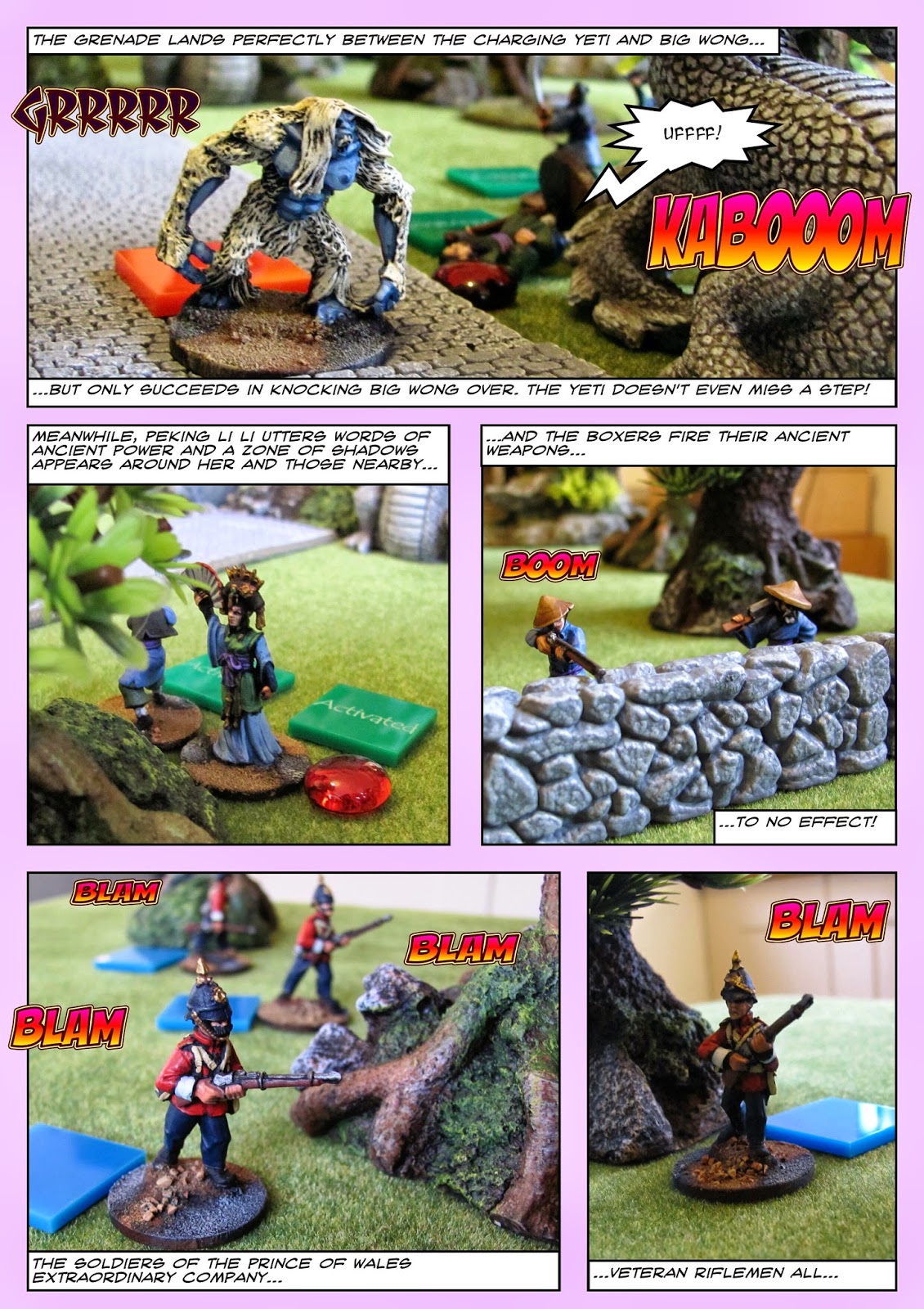 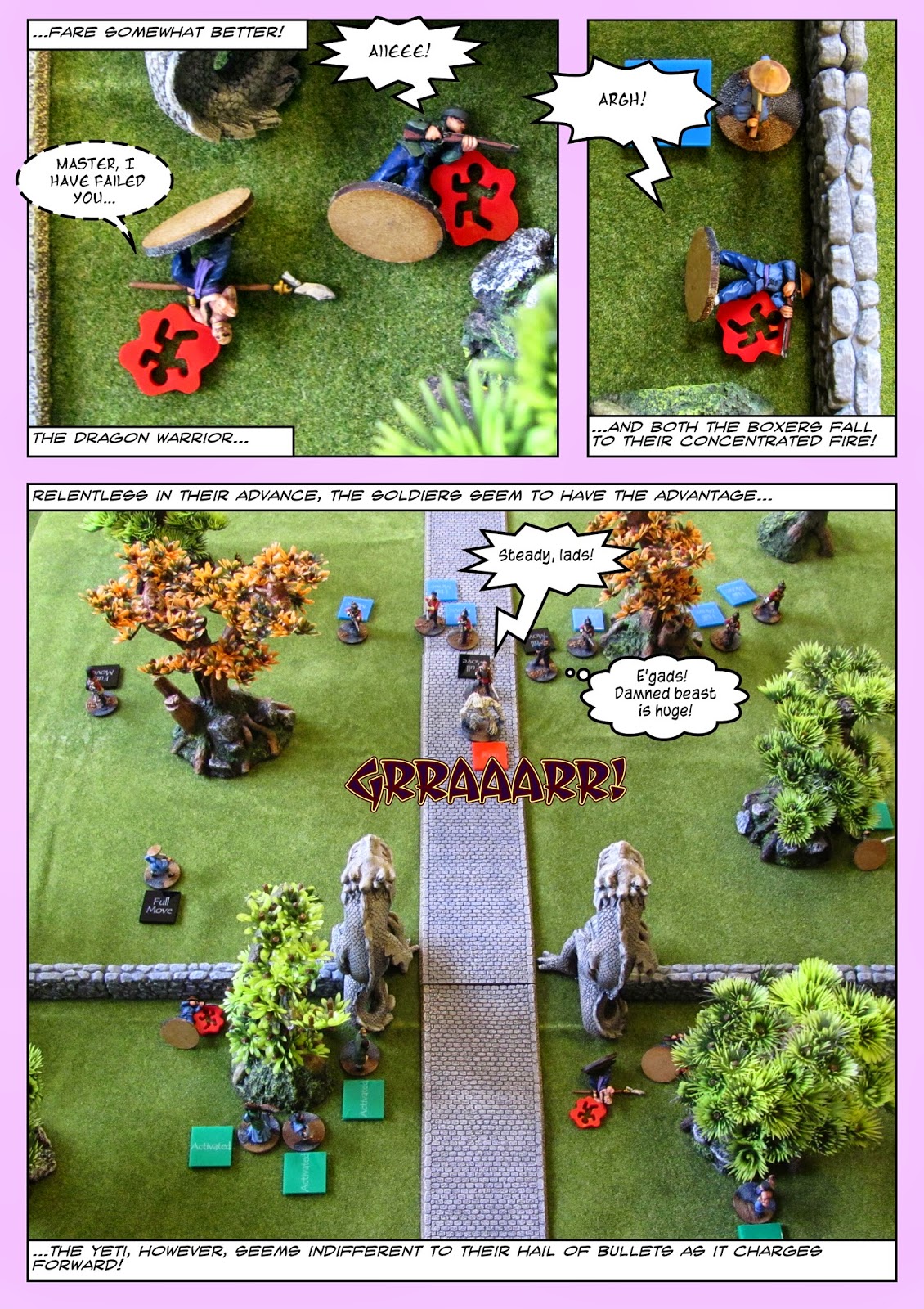 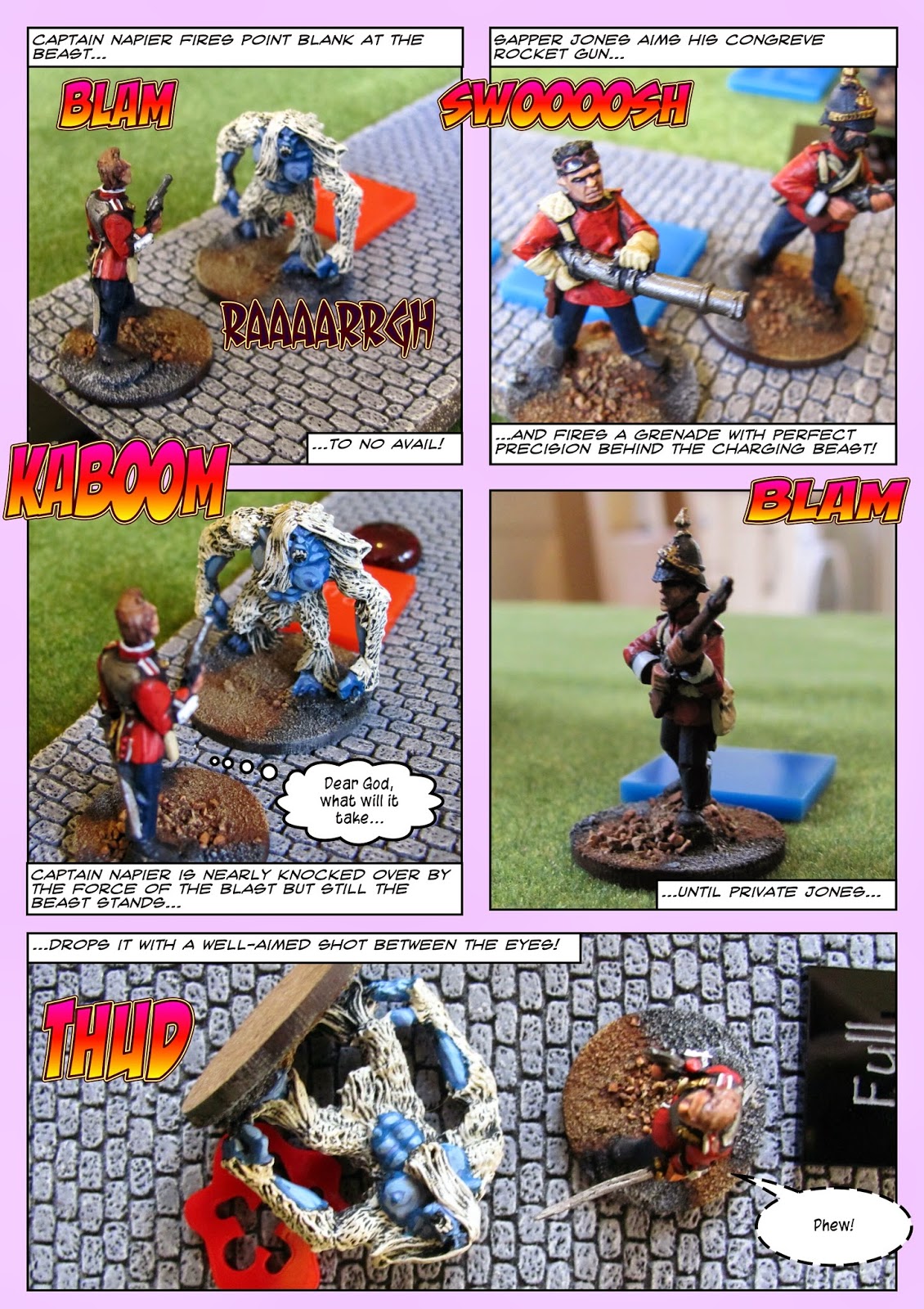 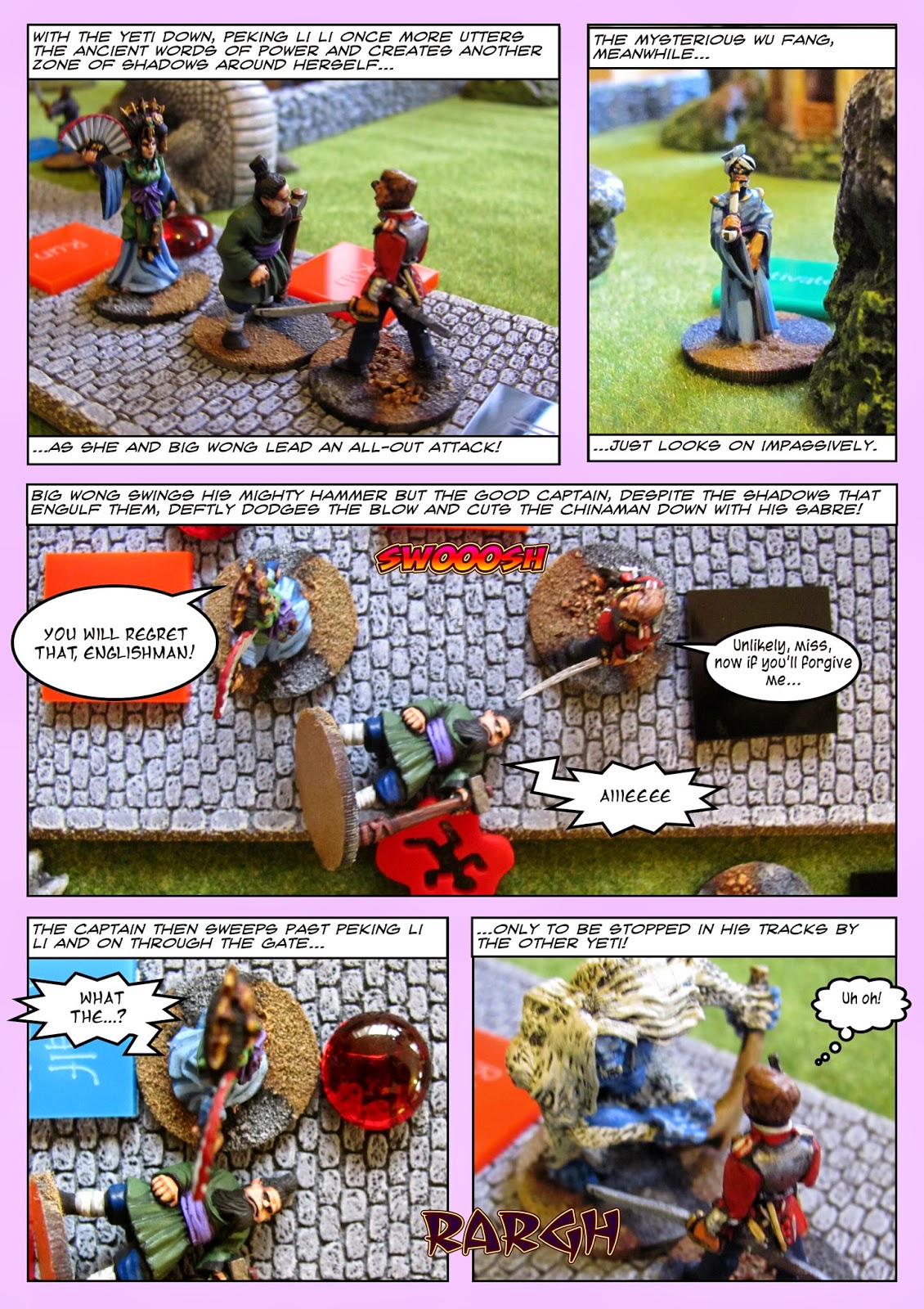 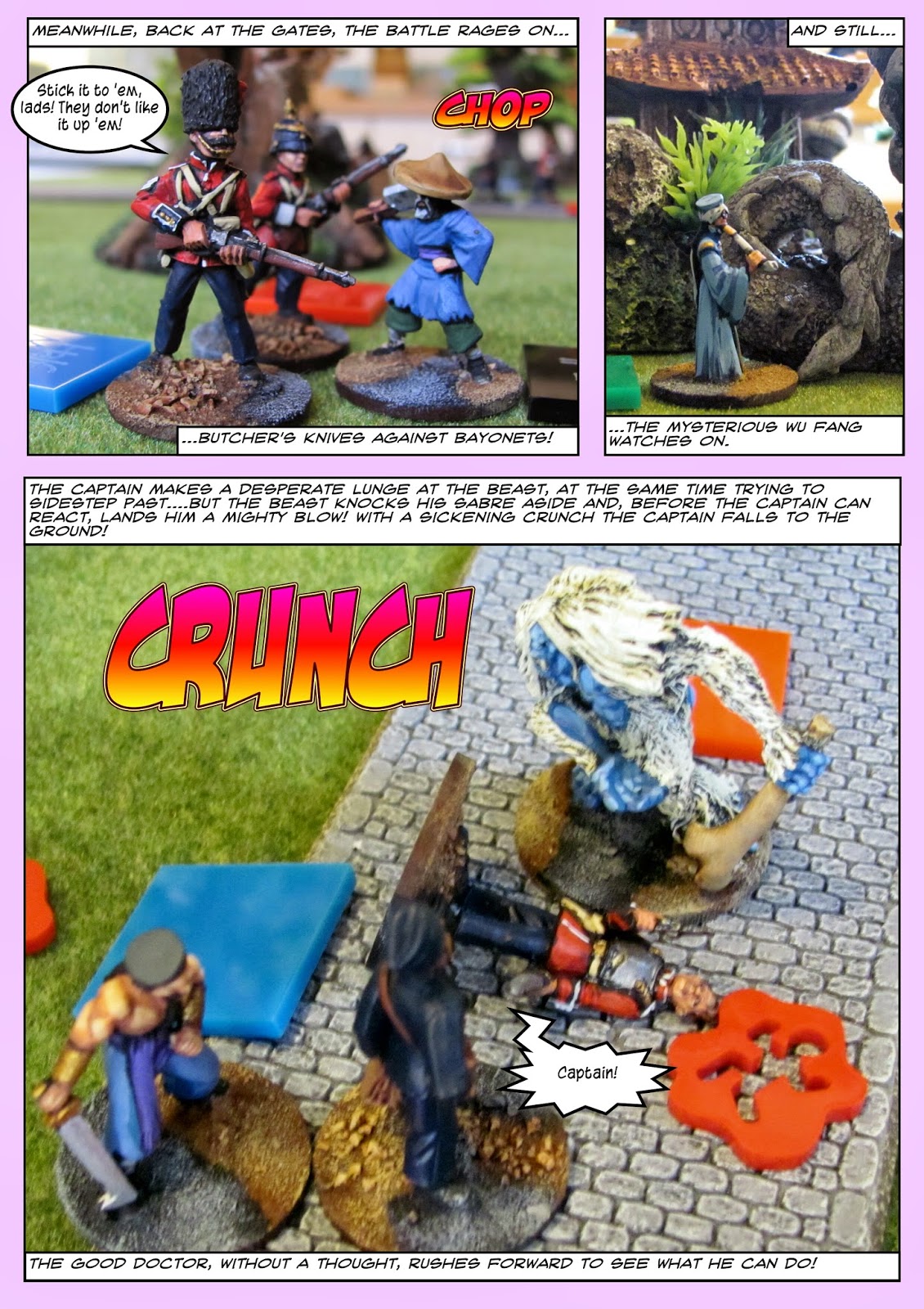 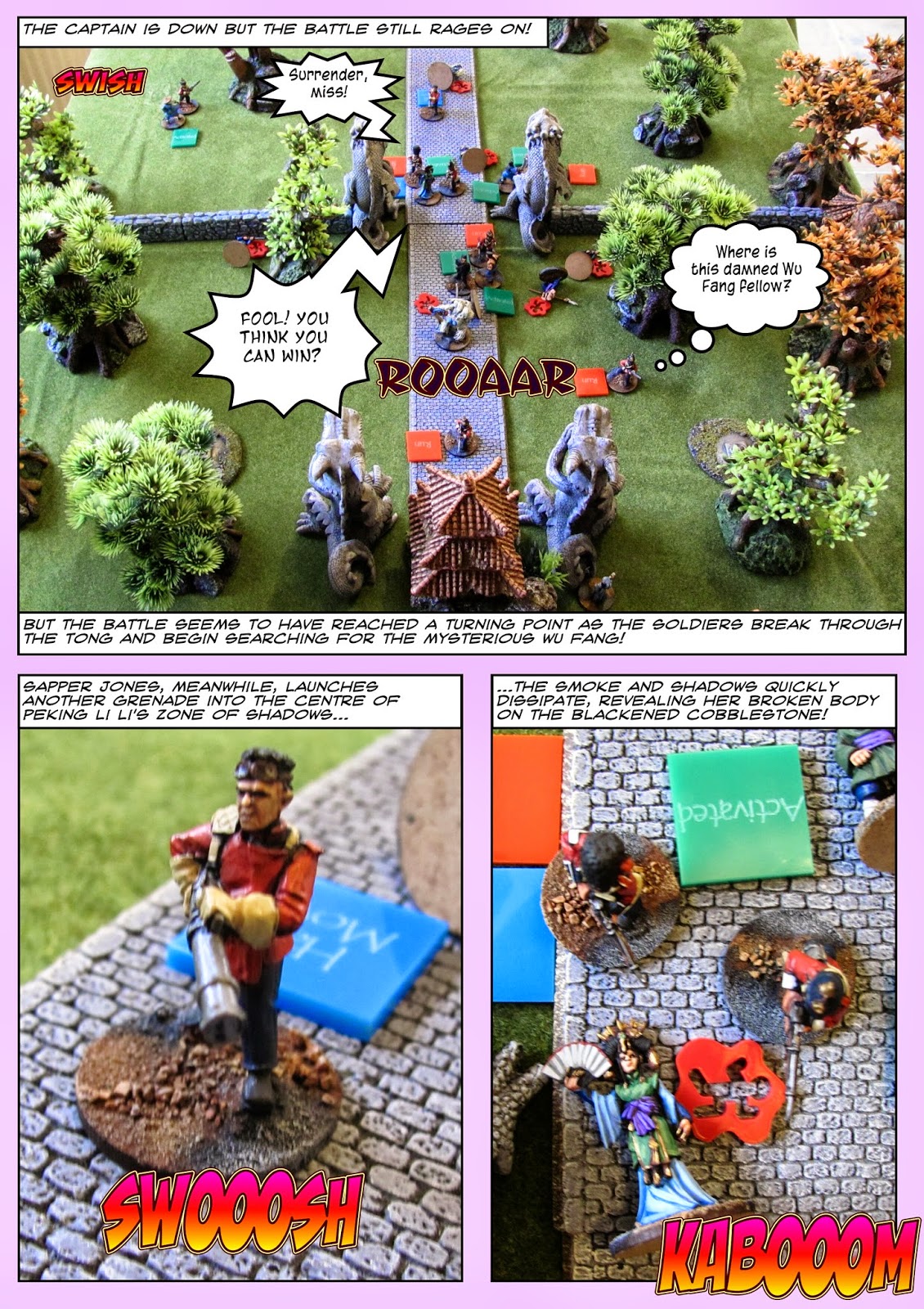 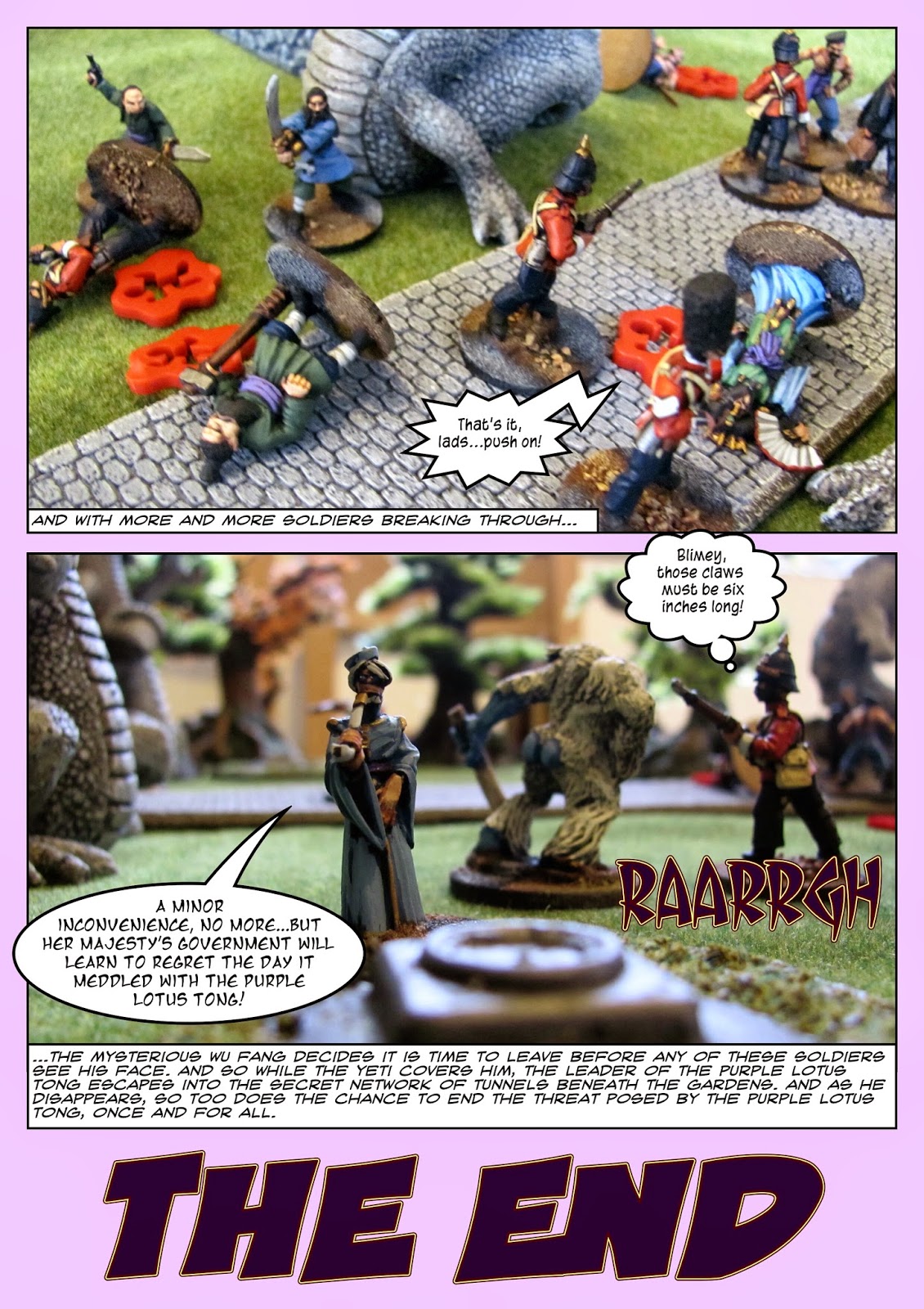 Here's a Dropbox link to a PDF version which is a bit easier to read!

We called it a draw this time! Which makes a change! The Tong suffered heavy casualties, including some of their main characters; Peking Li Li, Big Wong, the Dragon Warrior and one of the Yeti.  The Prince of Wales Extraordinary Company, meanwhile, would have come away relatively unscathed if it hadn't been for the loss of Captain Napier! However, the overall objective of the game was the Mysterious Wu Fang...and he escaped. The inscrutable and indifferent criminal mastermind remained in the shadows the entire time...until he saw his Tong overpowered and decided to leave his men to their fate! His anonymity is much more important than the lives of his followers, after all!

So until the next time...

All miniatures were painted by the inimitable Matt Slade! The scenery is mostly a mixed bag of aquarium decorations with the exception of the walls which are from Pegasus Hobbies and the cobblestone roads which are from Flames of War.

Posted by Mallius Vane at 15:02 No comments: 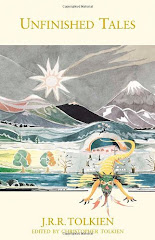